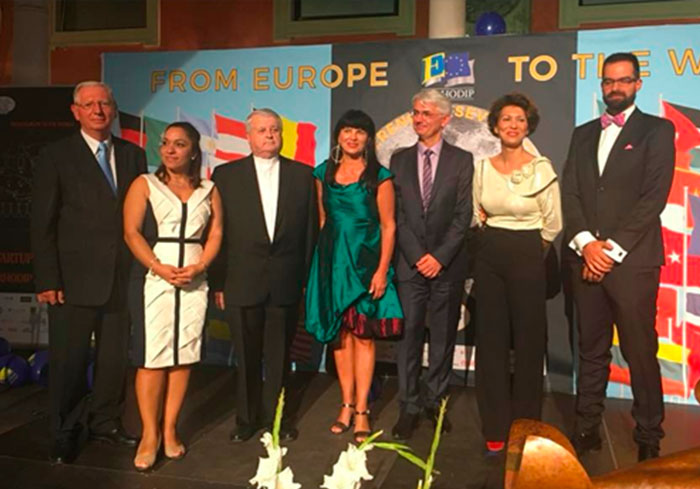 This association gathered the general assembly of EURHODIP at the headquarters of the Cajasol Foundation, Plaza San Francisco 1, Seville, Spain, and held the election for the new president for the next 3 year term. This was a unanimously decided by the 24 countries that will now be represented by the Spanish personality of Luis Lezama Barañano, founder and president for 28 years of the Escuela Superior de Hostelería of Seville. The School will be the new executive headquarters of the european association established in Brussels. The executive board led by Don Luis LEZAMA BARAÑANO is composed of Mrs. Nafiya GUDEN, general secretary, from North Cyprus, where will take place the next Eurhodip culinary contest next may, Mrs. Helena CVIKL, vice president, from Slovenia, Mrs. Laura GOMEZ RUIZ, treasurer, from Spain, Mr. Henri MAGNE, vice president, from Switzerland and Mr. Željko TREZNER, vice president, from Croatia, where Eurhodip will celebrate its next Conference, in October 2018.

This website uses cookies to improve your experience while you navigate through the website. Out of these cookies, the cookies that are categorized as necessary are stored on your browser as they are essential for the working of basic functionalities of the website. We also use third-party cookies that help us analyze and understand how you use this website. These cookies will be stored in your browser only with your consent. You also have the option to opt-out of these cookies. But opting out of some of these cookies may have an effect on your browsing experience.
Necessary Always Enabled
Necessary cookies are absolutely essential for the website to function properly. This category only includes cookies that ensures basic functionalities and security features of the website. These cookies do not store any personal information.
Non-necessary
Any cookies that may not be particularly necessary for the website to function and is used specifically to collect user personal data via analytics, ads, other embedded contents are termed as non-necessary cookies. It is mandatory to procure user consent prior to running these cookies on your website.
SAVE & ACCEPT